TORONTO, June 24, 2020 /CNW/ - Uranium Participation Corporation ('UPC' or the 'Corporation') today filed its Financial Statements and Management's Discussion & Analysis ('MD&A') for the period ended May 31, 2020.  Both documents can be found on the Company's website (www.uraniumparticipation.com) or on SEDAR (www.sedar.com).  The highlights provided below are derived from these documents and should be read in conjunction with them.  All amounts are in Canadian dollars, unless otherwise noted. View PDF version.

During the three months ended May 31, 2020, the Corporation completed the sale of 125,000 pounds of U3O8, in three separate transactions at a weighted average price of USD$33.33, for total cash consideration of $5,867,000 (USD$4,166,000). The Corporation recorded a gain on sale of $274,000, which was calculated as the difference between the cash proceeds received and the weighted average historical cost of the U3O8. The proceeds from the sale of the uranium was used to fund share repurchases under the Normal Course Issuer Bid announced on April 16, 2020 ('2020 NCIB').

The first fiscal quarter of 2021 was an eventful one for the uranium market – highlighted by a significant price recovery triggered by uranium supply disruptions attributed to the COVID-19 pandemic. The uranium supply/demand picture has improved considerably in recent years, with demand exceeding supply from primary production sources and the shortfall being made up by inventories and other secondary supplies well before the pandemic disrupted various active uranium mining operations. While prices have been steadily improving from the lows experienced prior to the 2017 announcement of the suspension of mining activities at Cameco Corp's ('Cameco') McArthur River Mine, prices remain cyclically depressed and well below the incentive price required for curtailed production or new production to enter the market.

COVID-19's effect on uranium supply has been dramatic, with several of the world's largest uranium producers announcing production cuts and uncertain timelines for the resumption of mining activities.

In March 2020, Cameco announced the closure of the only operating uranium mine in Canada, Cigar Lake. Cameco initially announced a four-week suspension of production at Cigar Lake in March 2020. The McClean Lake Mill, as the sole processor of Cigar Lake ore, followed suit with its own temporary shut-down. However, in April 2020, Cameco revised the timeframe of the Cigar Lake closure, announcing that the mine would stay closed for an indeterminate period. There are no indications yet as to when restart will happen, with health and safety in Saskatchewan's northern communities remaining a concern.

In April 2020, the world's largest producer of uranium, National Atomic Company Kazatomprom ('Kazatomprom'), announced that it would reduce operational activities across all of its uranium mines for an expected period of three months. Kazatomprom has indicated that production is expected to decrease by up to 4,000 tU (10.4 million pounds of U3O8) over this period.

While BHP Group Limited did not announce any COVID-19 related production changes at Olympic Dam, the operation reported significantly lower production for the quarter ended March 31, 2020, with uranium production down more than 2 million pounds of U3O8, or 18%, compared to the previous quarter. Though not related to the pandemic, the news added to the overall supply picture for 2020, contributing to upward pressure on the uranium price.

The uranium price started the quarter at US$24.70, fell to a low of US$24.10 in mid-March 2020, before rising almost 40% to end the quarter at US$34.00. With an unexpected reduction in production occurring during the period, inventories and other secondary supplies have been depleted faster and sooner than otherwise expected; coupled with the fact that nuclear power plants around the globe have remained online and continue to consume uranium through this difficult period, this is expected to accelerate the ongoing market recovery.

The quarter also saw the Nuclear Fuel Working Group ('NFWG') in the United States ('US') report its long-awaited findings in April 2020.  The announcement marked the end of a long cycle of disruption in the nuclear fuel market that began more than two years ago with a trade petition, launched in the US under Section 232 of the Trade Expansion Act of 1962, investigating the possible appropriateness of trade restrictions on uranium imports into the country. Following the US Administration's rejection of the Department of Commerce's findings that uranium imports threatened US national security, the NFWG was formed to examine the entire nuclear fuel cycle and the US' domestic capabilities.

Of primary interest to those participating in the front end of the fuel cycle and, in particular, uranium production, was the outlining of a plan which would see US$150 million per year, in each of the next 10 years, budgeted for uranium purchases from US producers, to stock a new US strategic uranium reserve. This idea had been shared for some time and was not a surprise to the industry. Each of the US$150 million tranches over the next 10 years will be subject to budgetary approvals in the preceding year, complicating the sustainability of the plan over the long-term. The report also indicated that 6,000-7,000 tU of UF6 would be produced each year, suggesting that Honeywell International Inc.'s ('Honeywell') UF6 conversion facility, which has been shut for the past two years, would return to service. No announcement on this has been made by Honeywell or ConverDyn, the marketing joint venture between Honeywell and General Atomics.

Beyond its impact on the uranium market, the COVID-19 pandemic is also having a major impact on global energy demand & greenhouse gas emissions. The International Energy Agency's ('IEA') Global Energy Review has expanded its reporting and is now tracking energy data in real time. Overall global energy demand declined by 3.8% in the first calendar quarter of calendar 2020, most of which took place in March as global confinement measures took effect. Coal demand was hit the hardest, down 8%, with oil falling closely behind at 5%, while the impact on gas demand was moderate, falling 2%. Electricity demand fell significantly – as much as 20% in some countries implementing full lockdowns. Renewables were the only source that posted an increase, driven by increased installed capacity and priority dispatch, whereby many electrical transmission operators are required to give priority to dispatch energy from renewable generators ahead of energy from other sources as far as the secure operation of the electricity system permits. The IEA estimates that annual global electricity demand will reduce by 5% in 2020, with 10% reductions possible in some regions. Tied to these energy use reductions are reductions in global carbon dioxide (CO2) emissions, which are expected to decline by 8%, comparable to levels of 10 years ago. This would be the largest ever year-on-year reduction in CO2 emissions.

Though nuclear is playing an important role as uninterrupted baseload supply during this period, it is expected that supply from nuclear units will also decrease, as overall demand does, though less so than other baseload contributors.

In April, French nuclear utility Electricité de France ('EDF') predicted that its nuclear power output could potentially fall by 20% from usual levels due to the economic slowdown associated with COVID-19. Its actual generation numbers from May confirmed the utility's forecast, as its output declined by more than 22% in the month.

Other demand developments during the quarter included an announcement in May 2020 from the United Arab Emirates' ('UAE') Emirates Nuclear Energy Corporation ('ENEC'), which declared that it had successfully loaded fuel assemblies into its Barakah 1 reactor and that the unit is in the advanced stage of start-up.  ENEC indicated that COVID-19 had not derailed their plans and that the first nuclear power facility in the UAE is expected to reach criticality very soon.

In Canada, Ontario Power Generation's Darlington Nuclear Power Plant also reached a significant milestone with Unit 2's reconnection to the Ontario electricity grid at 100 per cent power, following refurbishment of the reactor. Unit 2 represents the first of Darlington's four units to be refurbished under its 10-year project which is expected to be completed in 2026 and is intended to extend the lives of the reactors by 30 years.

In the US, Southern Company ('Southern') has added itself to a growing list of US utilities to announce a commitment to a long-term reduction in greenhouse gas ('GHG') emissions to net-zero emissions by 2050. In recent years Southern has reduced its GHG emissions significantly and has set an interim target of a 50% reduction in GHG emissions from 2007 levels by 2030.  The company has already successfully reduced its footprint and expects it could meet that target in advance of 2030, perhaps as early as 2025. Southern's ability to reach its goals will be enhanced by the construction of the two new nuclear units the utility is building in Georgia – Vogtle Units 3 and 4 – which are projected for startup in November 2021 and November 2022, respectively.

Certain information contained in this press release constitutes forward looking statements or forward looking information.  These statements can be identified by the use of forward looking terminology such as  'may', 'will', 'expect', 'intend', 'estimate', 'anticipate', 'plan', 'should', 'believe' or 'continue' or the negative thereof or variations thereon or similar terminology. In particular, this press release contains forward-looking information pertaining to the value of the Corporation's investments and expectations regarding uranium spot prices and uranium market factors, including expectations regarding uranium production levels, reactor restarts, levels of uncommitted utility reactor requirements, anticipated market supply and demand, the development of new nuclear power projects, the potential impact of international trade actions, and other statements regarding the outlook for the uranium industry and market.

This press release also contains information relating to third parties, including regulatory agencies, companies and other industry participants, derived from third-party publications and reports which UPC believes are reliable but have not been independently verified by UPC. 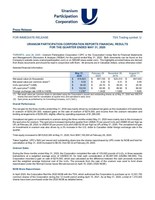