TORONTO, Sept. 26, 2019 /CNW/ - Uranium Participation Corporation ('UPC' or the 'Corporation') today filed its Financial Statements and Management's Discussion & Analysis ('MD&A') for the periods ended August 31, 2019.  Both documents can be found on the Company's website (www.uraniumparticipation.com) or on SEDAR (www.sedar.com).  The highlights provided below are derived from these documents and should be read in conjunction with them. All amounts are in Canadian dollars, unless otherwise noted. View PDF Version.

The most meaningful development in the uranium market during the quarter and, in fact, during the last 18 months, related to the completion of the investigation into the trade petition launched under Section 232 of the Trade Expansion Act of 1962 ('Section 232'), regarding uranium imports in the United States ('US'). On July 12, 2019, the United States President issued a memorandum which stated he did not concur with a US Department of Commerce ('DOC') finding that uranium imports threaten to impair US national security. As a result, no trade actions were implemented in respect of uranium imports under Section 232.

The US administration, however, took the opportunity to order a further review of the nuclear fuel supply chain in the US and commissioned the Nuclear Fuel Working Group ('NFWG') with a mandate to make "recommendations to further enable domestic nuclear fuel production if needed" within 90 days. Accordingly, a report from the NFWG is expected on or before October 10, 2019. It was recently reported that, as part of this review, the Nuclear Energy Institute ('NEI') submitted a letter to the NFWG which included a request of the US administration to stimulate the US uranium mining industry by making use of provisions contained within the 1950 Defense Production Act – specifically by issuing direct payments to either a US nuclear utility or domestic uranium producer for the sale of US origin uranium to a US nuclear utility.

In other uranium industry news, the global nuclear industry gathered in London during the first week of September for the World Nuclear Association's ('WNA's) annual symposium. The general atmosphere around the conference was more positive than it has been in recent years, which was supported by the release of the WNA's biannual Nuclear Fuel Report. The report evaluates nuclear fuel demand and supply scenarios for the period from 2019 to 2040, using a reference, low and high case. For the first time in several years, the outlook for global uranium demand was positive in each of the scenarios.

The increase in expectations around uranium demand can be linked to several events that occurred during the fiscal quarter. Firstly, there was positive news out of the US, with Ohio passing a long-awaited energy bill, which supported the continued operation of the Davis-Besse and Perry nuclear power plants, operated by FirstEnergy Corp. Previous attempts to secure subsidies for these plants were unsuccessful, which had led most in the industry to believe the plants would be shut down by calendar year 2021.

Further good news relating to future uranium demand came out of Uzbekistan, which has recently indicated that it intends to add another two reactors, in addition to the two reactors already proposed for construction.  Last October, Uzbekistan chose Russia's Rosatom to build two VVER-1200 reactors, which it expects to commission between 2028 and 2030. The country's Energy Minister said in a recent interview that it would add the two additional reactors to the same site.

In the United Kingdom ('UK'), a leaked government analysis stressed the need to build a fleet of new nuclear or carbon-capture power plants in order to meet climate targets.  The UK government believes that up to 40 GWe of low carbon power stations could be needed in 2050 to reduce Britain's emissions to 'net zero' and currently there is just one nuclear power plant under construction – EDF Energy's 3.2 GWe Hinkley Point C in England.

Also during the quarter, the long-awaited outcome of Cameco Corp's ('Cameco's) arbitration case against Japan's Tokyo Electric Power Company ('TEPCO') was released. In July, a panel of arbitrators ruled in favour of Cameco, supporting the argument that TEPCO did not have the right to terminate its supply contract with the producer by claiming force majeure. However, Cameco was awarded damages of only US$40 million, despite claiming US$700 million. The decision cannot be appealed, and an explanation of the ruling will not be made public.

Offsetting the positive impacts on uranium demand, TEPCO officially announced that it will decommission its Fukushima-Daini nuclear power plant in Japan. This nuclear plant was not damaged in the Fukushima-Daichi accident, but is located only a few miles to the south of the troubled Daichi reactors. With both sites being decommissioned, TEPCO will be left only with its Kashiwazaki-Kariwa site, which has seven ABWR reactors. The company added to this news when it indicated it would consider decommissioning one or more units at Kashiwazaki as part of a possible agreement to restart units 6 and 7.

Further, the general situation around the nuclear power industry in Japan remains challenging. It was recently reported that it would cost US$44.2 billion to bring all of Japan's operable nuclear plants into compliance with post-Fukushima safety standards. This estimate has sky-rocketed since 2013 when the estimated cost of meeting those requirements was US$8.3 billion.

On the supply side of the uranium market, the world's largest uranium producer, National Atomic Company Kazatomprom announced in August that it would continue to maintain its 20% production curtailment through the end of calendar year 2021, rather than to the end of calendar 2020 as it had previously announced.

Also on the supply side, the sale of Rio Tinto's share in the Rössing uranium mine to China National Uranium Corporation Limited ('CNUC') has been completed.  The arrangement called for an initial cash payment of US$6.5 million, with a contingent payment of up to US$100 million subject to certain benchmarks being met. With Rio Tinto's Ranger operation in Australia slowly ramping down over the next couple of years, one of the industry's major producers in past years will soon completely exit the market.

Certain information contained in this press release constitutes forward looking statements or forward looking information.  These statements can be identified by the use of forward looking terminology such as  'may', 'will', 'expect', 'intend', 'estimate', 'anticipate', 'plan', 'should', 'believe' or 'continue' or the negative thereof or variations thereon or similar terminology. In particular, this press release contains forward-looking information pertaining to the value of the Corporation's investments and expectations regarding uranium spot prices and uranium market factors, including expectations regarding uranium production levels, reactor restarts, levels of uncommitted utility reactor requirements, anticipated market supply and demand, the development of new nuclear power projects, the potential impact of international trade actions, and other statements regarding the outlook for the uranium industry and market. 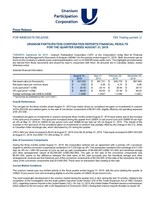