In addition, during the month of June, the Corporation entered into agreements to sell 100,000 pounds of U3O8 at a weighted average price of US$32.63, for estimated gross proceeds of CAD$4,424,000. These transactions have not been reflected in the uranium holdings above, as delivery and settlement will occur In July 2020. The net proceeds generated by the June 2020 uranium sales are expected to be utilized to replenish the Corporation's working capital and to fund future share repurchases.

Uranium Participation Corporation is a company that invests substantially all of its assets in uranium oxide in concentrates ("U3O8") and uranium hexafluoride ("UF6") (collectively "uranium"), with the primary investment objective of achieving appreciation in the value of its uranium holdings through increases in the uranium price. UPC provides investors with a unique opportunity to gain exposure to the price of uranium without the resource or project risk associated with investing in a traditional mining company. Additional information about Uranium Participation Corporation is available on SEDAR at www.sedar.com and on UPC's website at www.uraniumparticipation.com.

By their very nature, forward-looking statements involve numerous factors, assumptions and estimates. A variety of factors, many of which are beyond the control of UPC, may cause actual results to differ materially from the expectations expressed in the forward-looking statement. These factors include, but are not limited to, changes in commodity prices and foreign exchange as well as the risk that UPC will not obtain the anticipated benefits of its agreements with third parties. For a description of the principal risks of UPC, see "Risk Factors" in UPC's Annual Information Formed dated May 27, 2020 for the fiscal year ended February 29, 2020, a copy of which is available at www.sedar.com.

These and other factors should be considered carefully, and readers are cautioned not to place undue reliance on these forward-looking statements. Although management reviews the reasonableness of its assumptions and estimates, unusual and unanticipated events may occur which render them inaccurate. Under such circumstances, future performance may differ materially from those expressed or implied by the forward-looking statements. Except where required under applicable securities legislation, UPC does not undertake to update any forward-looking information statement. 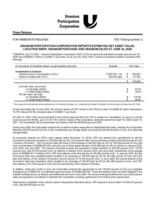